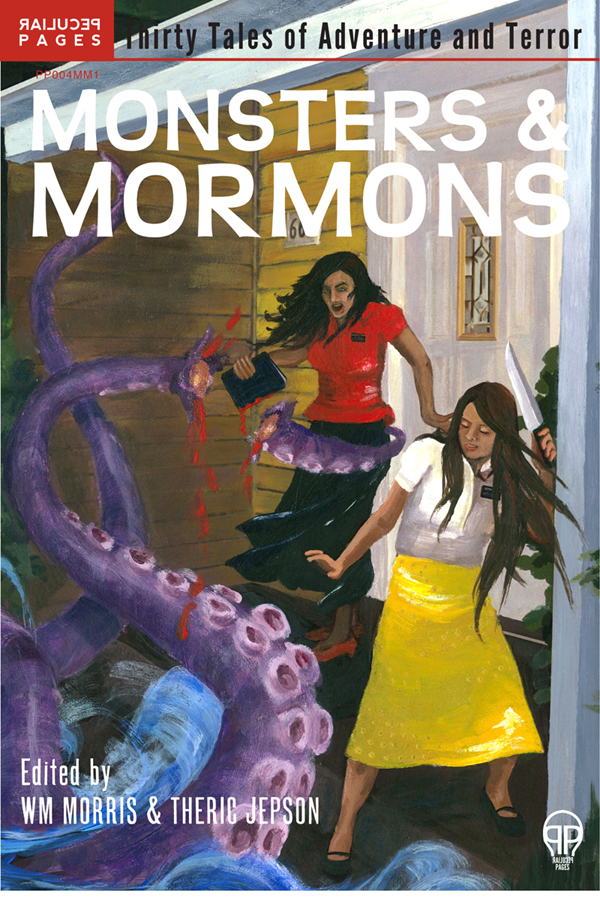 Monsters and Mormons, Thirty tales of adventure and terror. By Wm Morris and Theric Jepson (eds.)

It is very likely that you have never come across terms such as "Mormon Renaissance" or "Mormon Lit" and I don't expect you to be very aware of the vivid scene that has made these terms take shape in their relevant circles. Mormon writers, artists, musicians, and creative people of all sorts are coming together and interesting things are happening as a result.

One such interesting, peculiar thing is the short-story collection "Monsters and Mormons." For reasons unknown the Mormons are very fond of fantasy and science fiction: Orson Scott Card and Stephenie Meyer are the most prominent Mormon authors in or out of the f/sf genre, and it wouldn't be difficult to mistake C.S. Lewis for a Mormon considering how often he is quoted by Mormons in all sorts of contexts (we just love him) - even Battlestar Galactica has a Mormon connection. In that sense Monsters and Mormons is both a very good idea and a very obvious one. Fantasy and science fiction are very effective methods when wanting to express thoughts or ideas through symbolic means, and symbolism is something Mormons are quite prone to.

The stories in the book are delightfully varied: ghosts, zombies, aliens, demons, werewolves... Lots of zombies and aliens (no vampires though? Has Twilight cornered the market for LDS vampire lit that no challenger appears? Or is everyone afraid of the stigma of the sparkling vampires?) The Mormon perspectives are equally wonderfully differing: the stories star both missionaries and normal members, local leaders like bishops and Relief Society presidents as well as prophets and other general authorities. The stories are also set in different times, some in the future, some during events in Church History, some in modern time and others in alternative universes of the past. You meet a missionary whose companion has a mad scientist-ish streak, and Porter Rockwell whom Joseph Smith created out of clay to defend his people. You'll learn how Mormons swear, and also what gelatin has got to do with Mormonism. And polygamy. Mustn't forget the polygamy. The different takes are fascinatingly unique yet still recognisably connected to the Mormon culture, that each text becomes a discovery. And oh how funny some of the stories are!

It is difficult to say how much of a Mormon the reader needs to be to understand the stories and to catch the cultural references - but I am certain that the stories will fascinate and thrill even without that cultural connection point. And that is very much the gist of the Mormon Renaissance itself: that the Latter-day Saints are a minority with a vibrant subculture which has an inherent value, just like any other minority. The interesting thing about the Mormons as a minority is that the defining characteristic of the people is not ethnicity, language or place, and that the faith is the only binding factor that this global group has - yet it is strong enough to form an identity and a sense of community or of united group.

In such a varied collection, it is difficult to pick favourites, but I definitely enjoyed the approach of "something strange or horrifying invades the every-day" rather than the imagines worlds of tomorrow (or yesterday): "Other Duties" by Nathan Shumate tells of a bishop whose ward has a special calling: to battle demons; "Charity Never Faileth" by Jaleta Clegg is a story of the carelessness with which some Mormon women treat the unique opportunities to care for and serve one another, and the monstrous consequences that carelessness can have - and Green Jell-O of course; "The World" by Danny Nelson is possibly the most delightful description of the insides of a contemporary Mormon's head; and "The Eye Opener" by Brian Gibson -which is really close to being my very favourite - tells of what goes on during a prayer, that strange time when no one is looking up...

The book is also beautifully illustrated, and two of the stories are in comic form. And the back cover has a few words hidden near the spine written in Deseret alphabet. I love little details like that <3

You can find Monsters and Mormons on Facebook or find a way to get a hold of a copy on http://b10mediaworx.com/b10mwx/catalog/monsters-mormons

PS. [iippo] has read one of the stories out loud: <URL:stuff/GreenJello558.mp3>

2012-04-12 [Viking]: "Orson Scott Card and Stephenie Meyer are the most prominent Mormon authors in or out of the f/sf genre"

You should have included Brandon Sanderson there.

2012-04-12 [iippo]: There's also Tracy Hickman. And and and... But I just reckoned two can be the most prominent, one the one that sells ridiculous amounts of books and has Hollywood movie deals, and the other that has been around a bit longer and is more versatile (Card has written everything it seems).

2012-04-12 [Viking]: Yeah, well, Sanderson also sells tons of books even though he's only been a professional writer for about 8 years. Also, Mistborn may very well become a movie soon:
http://www.brandonsanderson.com/blog/1074/Mistborn-Movie-Update-and-Hugo-Nomination

Besides, he's becoming one of my favorite authors, so there =P