Dementors are by definition dementing. They feed on happy thoughts and memories. They also are considered dead. They can do a terrible thing called "The Dementor's Kiss" which drains the victim of his or her soul. Being fed some chocolate usually helps bring back the happy memories. They can also block out light and lower the tempeture to below freezing. Unless you can perform a Patronus Charm, do not try to battle a Dementor or resist one. If you see one roaming about, run. If it's a Dementor that is being used to search for an evil person, allow it to search, and eat chocolate while it does.
-JK Rowling's Harry Potter books


The Dementors are soulless creatures considered to be among the foulest beasts on Earth. They are, in more ways than one, pure evil in its most pure form. They are soul-sucking fiends who (now)guard the wizard prison, Azkaban. Though they ally themselves to the strongest and most powerful person in their area. In this case the Ministry and perhaps even the Minister himself. Later, when Voldemort rises to power once more, thye immediately desert their prison guarding posts and move to Voldemorts side.
In the books, Dementors appear to have a generally human-ghost shape, approximately ten feet in height, but covered in dark, hooded cloaks that reveal only grey, decayed hands. The wraith-like creatures have no eyes, and there is a large hole where the mouth should be. They grow like fungus in the darkest, foulest most disgusting places. Their breeding causes a thick, chilly fog. 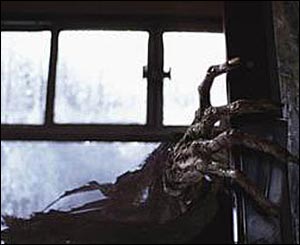 Muggles can not see Dementors but it affets them in the way they affect all around them: they suck out every single happy thought and memory you have in your being. Leaving you cold, alone, depressed and basically subdued and emo.
It is probable that J.K. likened the Dementors as an explanation to human depression which is often without a clear cause or reason. She describes it as "that absence of being able to envisage that you will ever be cheerful again. The absence of hope. That very deadened feeling, which is so very different from feeling sad."

Being blind, Dementors sense and feed on the positive emotions, happiness and good memories of human beings to move around, forcing them to relive their worst memories as a result. The very presence of a Dementor makes the surrounding atmosphere grow cold and dark, and the effects are cumulative with the number of Dementors present. Despite their attachment to human emotion, Dementors seem to have difficulty distinguishing one human from another, as demonstrated by Barty Crouch Jr's escape from Azkaban, wherein they could detect no emotional/mental difference between the younger Crouch and his mother.

In addition to feeding on positive emotions, Dementors can perform the Dementor's Kiss, where the Dementor latches its mouth onto a victim's or just above it and sucks out the person's soul. The victim is left as an empty shell, incapable of thought and with no possibility of recovery. It is believed that existing after a Dementor's Kiss is worse than death. The Ministry of Magic occasionally uses this as a punishment, such as on Barty Crouch, Jr.

One way to shield oneself from Dementors is to use the Patronus Charm to drive them away. Chocolate is an effective first aid to mild cases of contact.

Dementors as seen in the Prisoner of Azkaban movie


-by [Linn Scarlett]
'Fantastical Beasts & Where to Find Them' - Newt Scamander
'Prisoner of Azkaban' and 'The Deathly Hallows' by J.K. Rowling
'The Sorcerer's Companion: A Guide to the Magical World of Harry Potter' - Allan Zola Kronzek and Elizabeth Kronzek