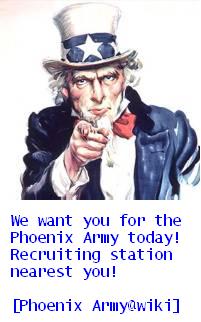 The Tale Of Phoenix Alchemist's Origin
He was born in the great city of Flaria and he carried a tale with him, and a tale that once Phoenaria will never forget. He was born and when his brother once that was known scorched him as he was the Psionic Child of Eventar. As he was scorched he was born of great wings and into the heart of the phoenix, his bare feet chosen to walk on earth and his wings to sore in the sky. As then he grew into a child and was a skilled archer, he then learned to use his flame power, and last he learned a high rank alchemy at the age of 9. He soon was a warrior of Flaria and created his own army therefore at age 11. As then when he lived in a giant town of Elftown his wisdom grew and so did his strength. He then met a flame gypsy that was born in the land of Thadien which was known as the land of the Rose. He then studied with her and soon became special friends, she was the powerfullest rose guardian and was also a skilled fire gypsy of pyro studies. He then found his true origin name in the land of Advent, and his name was Kyoto-Kashi San and he found it with the help of a prince named Nazarath and his loyal companion Neferoth. He also met quite a few werewolve warrior rebels named by Rioan, Kiche, and a strong mistress named Feara which was also known as Fearathress. He soon met another alchemist studier of the wikan tribe named Duhe Rahn which was a partly phoenix too, and he was known as the dark phoenix of the light path. As Kyo went on his journey of wisdom he was known as the Oscuries the Phoenix of Alchemy and then was a poet and a teacher of great music. He then still lives in this town of Elftown and still makes many journey's ahead.


The End
The logged in version
News about Elftown
Help - How does Elftown work?
Get $10 worth of Bitcoin/Ethereum for free (you have to buy cryptos for $100 to get it) and support Elftown!
Elftown – the social site made for fans of scifi and fantasy
Visit our facebook page