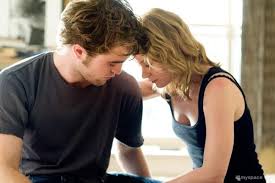 To be honest I was not sure how to rate this one. It was a long movie, nearly three hours and the opening scene sets the tone for the entire experience near perfectly. It opens on a little girl who watches her mother get murdered. You think it might get better. No movie could have this level of tragedy right? But you would be wrong.

You are introduced to Tyler (Robert Pattinson) who is a troubled twenty one year old living in New York City. He doesn't seem to have any ambition or goals. The movie is shot in a documentary type-style and often fades from scene to scene like a book with too many line breaks. He meets a girl, Ally (emilie de ravin) who has the same slightly cynical nature and upsetting background as Tyler.

The movie goes through typical conflict and shows you the darker side of reality. I expected this movie to, as most movies do, follow a simple format; depressing beginning, climax, happy ending. The way the movie is structured surely leads you to believe that.

I think it's the ending that has left me sitting here like someone who has been struck repetitively in the face with a bag of bricks. I'll let you be the judge of the movie. I suggest you watch it. Because even though I am horrified by the way the movie concluded itself it showed this atrocity the way it should be documented. Raw. Painful. Un-imaginable.

Might I suggest keeping a box of tissues close at hand though.

Because I honestly could have never guessed how it would have ended. And it made me feel something which is difficult for most traditional cookie cutter movies to do.