(MINOR SPOILERS, BUT NOTHING THAT WILL RUIN THE SURPRISES ;D)


Plot: There exist "Messengers of Magic" who have the power to grant one wish to a chosen girl. However, that girl must then become a magical girl and fight against witches, evil creatures born from curses that are responsible for murders and suicides. A schoolgirl named Madoka Kaname and her friend Sayaka Miki are approached by a familiar named Kyubey and magical girl named Mami Tomoe with offers of becoming magical girls, while another magical girl, Homura Akemi, tries to prevent Madoka and friends from making such a deal... (Taken from the official website)

Review: I've been a fan of anime since I was a child, so to say I was always on the look out for a new and interesting anime would be an understatement. Being a fan for so long is not without its let downs, once you've seen ten anime shows you've pretty much seen 80% of the plot devices used, it's a rare thing nowadays to stumble upon a truly unique and captivating anime. Puella gives you exactly that! It was recommended to me by a friend, so I watched a few clips and after the first episode it became apparent that this seemingly sweet and cute-styled anime had a much darker plot. We are introduced to the main characters whose designs are adorable and generally what you expect from some 'magical girl' anime.

Here we have Madoka, one of the main protagonists, with her friend Sayaka and other friend Hitomi.
So in the first episodes most of the major characters are introduced and it is seemingly what you would expect. 'Girl has a dream about this unknown magical girl and goes to school the next day to discover she is the new transfer student.' I've been there, rented the room, and stolen everything not glued down. However, half way through the episode things begin to get interesting. On a trip back from school, Madoka meets one of the 'Messengers of Magic' known as Kyubey, the poor thing is being pursued by the transfer student and is nearly half dead by the time Madoka finds him. Refusing to let the transfer student, known as Homura, kill him, she is then rescued by her friend Sayaka and the duo escape with their new friends Kyubey. Enter the Witches. 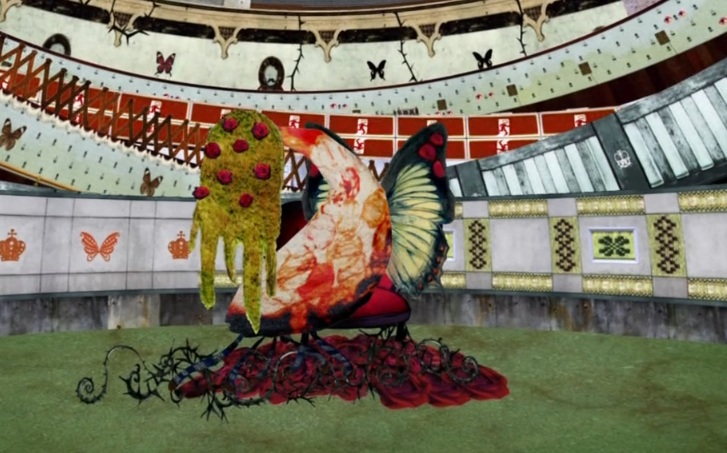 As mentioned above, Witches are being born of despair while Puella are the beings born of hope. They are possibly one of my favorite aspects of the anime since when they are around the characters almost enter another world filled with 2-D constructs and almost abstract begins which flit around like paintings. (And each witch has its own interesting design and environment it creates to trap its victims) Madoka and Sayaka are now caught by a witch and about to be devoured by the despair it seeps. Just when everything seems lost we are introduced to another character known as Mami, a second magical girl who has a contract with Kyubey and is here to save them. She fights the witch off and aids her fallen Messenger whilst also befriending and opening the world of the Puella to Sayaka and Madoka. And our story begins as does the misery, madness and downfall of EVERY character in the series.

By know you can probably guess why this anime stands out, the plot and designs are extremely interesting and it is much darker than you would have thought. However, things get better, or worse if you like happiness and sunshine. As each episode unfolds were fall further and further into the darkness with the characters and begin to understand the sacrifices they must make for their one wish, and how kindness and heroism are only met with crushed hope and despair. I shall not soften the blow, there are no happy endings in this anime, and while it is a mere 12 episodes long, it captures you from it's bright beginning to the bitter end.